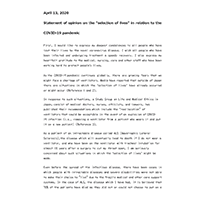 As the COVID-19 pandemic continues globally, there are growing fears that we might face a shortage of ventilators. Media have reported that outside of Japan there are situations in which the “selection of lives” have already occurred or might occur (Reference 1 and 2).

In response to such situations, a Study Group on Life and Medical Ethics in Japan, consist of medical doctors, nurses, ethicists, and lawyers, has published their recommendations which include the “reallocation” of ventilators that could be acceptable in the event of an explosion of COVID-19 infection (i.e., removing a ventilator from a patient who wears it and put it on a new patient) (Reference 3).

As a patient of an intractable disease called ALS (Amyotrophic Lateral Sclerosis), the disease which will eventually lead to death if I do not wear a ventilator, and who have been on the ventilator with tracheal intubation for almost 18 years after a surgery to cut my throat open, I am seriously concerned about such situations in which the “selection of lives” might be made.

Even before the spread of the infectious disease, there have been cases in which people with intractable diseases and severe disabilities were not able to make their choice to “live” due to the fragile medical and other care support systems. In the case of ALS, the disease which I have had, it is believed that 70% of the patients have died as they did not or could not choose to put on a ventilator.

I fear the tendency of thinking that it might be “right” to give younger people higher priority in ventilator allocation decisions than the elderly and those with intractable diseases will lead to the eugenic ideology that theoretically justifies discrimination against people with disabilities, as heard in speeches such as “people who are not productive should not be put ventilators on”.

The first thing we should consider now is, not how to make decisions to whom a ventilator should be put on, but how to develop a system that can deliver the equipment to all people who need it.

The government of Japan has made efforts to increase the production and export of ventilators within its emergency economic measures (Reference 4-1 and 4-2). I expect the government to work hard to ensure that the medical care reaches the people who need it. At the same time, efforts should be made to secure and retain medical and nursing staff working in intensive care units, improve their treatment and working environment, and provide thorough support for their mental and physical health.

I believe the value of life is, “side by side”, same for everyone.

FUNAGO Yasuhiko, Member of the House of Councilors

I heard my father’s ventilator 'turned over to young people' by phone, despairing at the choice of life, in Spain (Asahi Shimbun Digital, April 5, 2020)

[Mr.Oscar Haro said that his father had died due to COVID-19 after not being given a respirator.]

Corona treatment an afterthought for Down's syndrome or autism? Alabama's shocking guidelines on respirator shortage in the USA (FINDERS, April 7, 2020)

Study Group on Life and Medical Ethics, “Recommendations for the process of determining the distribution of ventilators in the event of an explosion of COVID-19 infection” (March 30, 2020)

The Ministry of Health, Labour and Welfare's supplementary budget for the year of 2020 appropriated 26.5 billion yen for securing ventilators.

The Ministry of Economy, Trade and Industry's supplementary budget for the year of 2020 appropriated 8.77 billion yen for a project to improve facilities for the production of Abigan (an anti-influenza virus drug), ventilators and other necessities.

(Mr.)FUNAGO Yasuhiko was born in 1957 in Gifu Prefecture, Japan.

Funago was diagnosed with ALS (Amyotrophic lateral sclerosis) in 2000 when we was working at a trading company, and then had a gastrostomy and a ventilator in 2002.

In 2012, Funago was appointed as a director of a home-visit care company, being asked by a nurse whom he had met through the home-visit care and is currently serving as an advisor for the company.

Funago was elected as a member of the House of Councilors in the 2019 National Election and became Japan’s first parliamentarian with ALS in the history.

This statement has been issued as Funago himself is a person with an intractable disease and with severe physical disabilities wearing an artificial ventilation.

（Translation from Japanese to English by a Group “Began”） 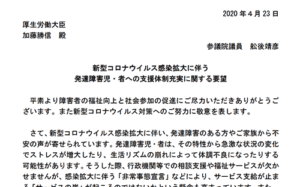 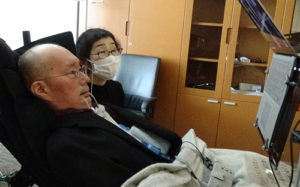